For over half a year, we have been working on the basic skills and finer qualities of battōjutsu, as taught in Chikushin Martial & Cultural Training Group. Having a great interest in battōjutsu early in my martial arts career, I’ve personally been training in this based on different instructions received alongside with kenjutsu. For those curious, battōjutsu (抜刀術) is a systematic approach to drawing out a sheathed Japanese sword to cut, often labeled as “sword-drawing” and “draw-cutting”¹. Generally the techniques for sword-drawing are widely recognized by a more modern title, “iaidō²” (iai for short), although there are certain martial schools that still use the term battōjutsu (battō for short)³.

For today’s article, we’ll take a look into the origins of battō (iai), which is tied to Hayashizaki Jinsuke Shigenobu, the founder of this unique sword system. Sources used in writing this include (but not limited to) the following:

The origins of battō/iai as we know it today takes place around the mid 1500s by a young man named Hayashizaki Jinsuke Minamoto Shigenobu (林崎甚助源重信). While many martial schools give credit to his extraordinary development of techniques for fast “draw-cutting”, the reasoning for him even creating such a sword style was under grim conditions. To understand this, we’ll look further into the family he was born into. 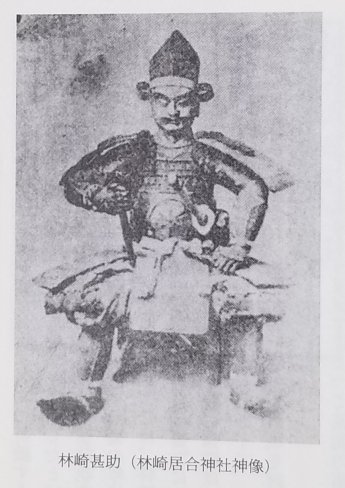 Pic of a statue of Hayashizaki Shigenobu, which is housed in Hayashizaki Iaijinja. From the book “Kanbon Nihon Bugei Shoden”.

While Shigenobu is widely known under the surname “Hayashizaki”, he was originally from the Asano family. He’s the son of Asano Kazuma Minamoto Shigeharu (浅野数馬源重治) and Sugano (菅野). Shigeharu, Shigenobu’s father, was once a guard acting as lead inspector of the northern section of the Imperial palace. From 1538 he was employed as an officer to serve Mogami Inaba-no-Kami Mitsuhide (最上因幡守満英), who was the 6th lord of Tateoka castle in Dewa Country (present day Murayama City, Yamagata Prefecture). Sugano⁴, Shigenobu’s mother, was from the Takagi family of Tateoka, Dewa Country. Shigeharu and Sugano would get married in 1540, and later have Shigenobu in Tateoka in 1542. Upon his birth, Shigenobu was given the name “Tamijimaru” (民治丸).

In the Asano family, their ancestral deity⁵ was “Kumano Myōjin” (熊野明神), whom they prayed to. Kumano Myōjin (also referred to as “Hayashizaki Myōjin” in some sources) was housed in a 3-room shrine within “Arayato no Ji” (荒宿の地), an area located in the northeast section of Hayashizaki grounds of Ōkura forest (present day Hayashizaki, Murayama City, Yamagata Prefecture). Shigeharu continued with these customs and paid his respects with his family when they had the chance to visit Kumano Myōjin shrine.

Sometime in 1547, Asano Shigeharu went to go play a game of Go⁶ with a priest at the Kumano Myōjin shrine. After spending his day doing so, he was returning home late in the night. On his way home, Shigeharu was targeted by a warrior named Sakaichi Unsai (坂一雲斎)⁷, who apparently harbored ill intentions against him. Using the night as a cover, Unsai ambushed Shigeharu and murders him. Later Shigeharu’s death is notified to his family members, as well as the identity of the murderer. Fueled with anguish, Sugano and her son plotted to get revenge against Sakaichi Unsai.

Shigenobu and his mother would remain in Tateoka, where he began receiving training in kenjutsu at the age of 8 from Higashine Keibu Tayu (東根刑部太夫)⁸, who was a warrior of Tateoka castle. In 1554, Shigenobu, at the age of 13, would periodically stay at Kumano Myōjin shrine to pray not only for protection and success in extracting vengeance to his family’s ancestral deity, but to receive further instructions to perfect his use with the sword. Armed with his late father’s family sword called Nobukuni (信國), he trained in the methods of kenjutsu, and worked hard in developing a style that would prove effective against his target. Instead of just merely practicing how to swing a sword in a duel-like fashion, Shigenobu focused on techniques that evolved around drawing the sword out of its sheath to deliver unpredictable cuts. The family sword he trained with was a rather long one, measuring to 3 shaku 2 sun⁹. Possibly made for use on the battlefield, this sword gave him exceptional reach. To effectively use it for fast-draw cutting purposes, especially against someone who used a shorter sword, Shigenobu would need to develop methods for drawing this long sword out with speed.

BIRTH OF BATTŌJUTSU AND HAYASHIZAKI SHIGENOBU

It is said that in 1556, Shigenobu underwent a special ritual called “Hyakunichi no Sanrō¹⁰”, where he spent 100 days at the shrine devoting himself to prayer for guidance in perfecting his ability in battō. Sometime during the evening of the 100th day, Shigenobu witnessed a divine vision. While sleeping, he was visited by Kumano Myōjin in his dreams, who demonstrated to him a secret technique called “Manji Nuki¹¹”. In learning this, Shigenobu became enlightened to the inner secrets of sword-drawing. With this revelation, he decided to call his sword system “Shinmyō Hijutsu no Junsui Battō¹²”, and set off to train further to a master-like level with the sword. 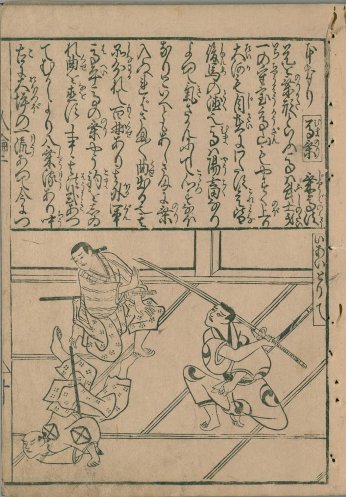 Reaching the age of 18 in 1559, Shigenobu changed his name from “Asano Tamijimaru” to “Hayashizaki Jinsuke Minamoto Shigenobu”¹³. This was to identify his growth, as well as paying homage to the grounds where he was nurtured into a swordsman, Hayashizaki. In recognition of this growth, his sword system today is respectively called “Hayashizaki Musō ryū¹⁴”,  as this title reflects how he was divinely enlightened in the secret methods of battō.

Assuming his new name and role as a swordsman, Shigenobu set out to fulfill his family’s desire for revenge on his father’s murderer, Sakaichi Unsai. This doesn’t happen overnight, however, as time was needed to possibly track down his target. This finally becomes a reality, for in 1561 Shigenobu was able to locate Sakaichi Unsai at his home in the capitol city Kyō (present day Kyōto, Japan). Details of the confrontation varies depending on the source which tells it, so no concrete info on how it transpired. What all sources agree on is that Shigenobu was able to cut down Sakaichi and successfully extract revenge. With his mission completed, he then returned back to his hometown, and paid his respects at Kumano Myōjin shrine. He also offered the Nobukuni sword to the shrine.

SPREADING THE KNOWLEDGE OF SWORD-DRAWING

Upon returning home, Shigenobu was caring for his sick mother. However, a year after successfully carrying out revenge, Shiguno passed away in 1562. With no other responsibilities at hand, Shigenobu left Hayashizaki to travel around Japan and further refine his martial skills. He crossed into a few areas well known for their martial combat. For example, it is said that in 1563 he went to Kashima and received tutelage from Tsukahara Bokuden¹⁵ (塚原卜傳), founder of Kashima Shintō ryū¹⁶. Shigenobu was able to learn the secret method of Kashima Shintō ryū’s highest technique, called “Ichi no Tachi¹⁷”. It is also mentioned that he studied Tenshin Shoden Katori Shintō ryū¹⁸. Outside of kenjutsu training, Shigenobu studied “Onmyō Kaigō¹⁹ during his stay at Ichi-no-Miya (present day Omiya)²⁰ in Owari Country (present day Aichi Prefecture). The philosophy from Onmyō Kaigō was also incorporated into his sword-drawing style.

Outside of his own personal kenjutsu training, Shigenobu took the role of instructor for his own sword system. For example, in 1563 he resided in Yonezawa, Aizu (Fukushima Prefecture) for some time. During this, he was actively instructing his style of battōjutsu to those in Akai Village, Wakamatsu (Fukushima Prefecture). During the course of his journey Shigenobu gained other students. Notable names that developed their own sword drawing style based on Shigenobu’s teaching include the following: 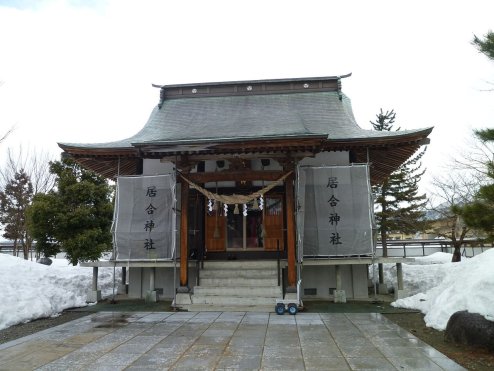 A pic of Hayashizaki Iaijinja. From Wikipedia.

In his later years, Shigenobu stayed for about a year in the residence of his student, Takamatsu Kanbē Nobukatsu in Kawagoe, Bushū (present day Kawagoe City, Saitama Prefecture). In 1617, he received permission to leave on a short trip to Ōu (north-eastern section of Japan). However, during the same year he later became very ill in the middle of his travel, and passed away. Although he passed in an untimely manner, his name and his system of sword-drawing lives on. In recognition to his life, the Kumano Myōjin shrine was renamed to “Iaijinja” (居合神社).

This concludes the history of Hayashizaki Shigenobu, and how he developed the martial system of sword-drawing. I hope this was a good and informative read for everyone.

2) 居合道. Iaidō is the modern, non-violent approach to sword-drawing, which stems from the older version “iaijutsu” (居合術).

3) There have been many debates regarding the differences between the names “battō” and “iai”. Some points made range from one specializing only in seated forms to one incorporating practices such as test cutting. The truth is, there are no real differences, for they both mean the same thing.

The use of either battō or iai throughout history lies on certain factors. One example falls on which naming convention was popular at given time. Another, depended on current headmaster of specific school and what principles & philosophies that were intended to be expressed. We also have to keep in mind that as Japan moved more to periods of less wars and conflicts, some surviving schools changed their curriculum from being combat-oriented to self-development. Iaidō is a prime example of this.

All in all, while the various sword-drawing styles of today may focus on specializing in certain traits, the underlining meaning between the words battō and iai are the same.

4) Sugano is unusual as a given name. On top of this, she is also associated with another name that is written as “志我井”. This could possibly be her given name, but pronunciation is obscure.

6) 碁. Go is a Japanese board game where players try to dominate the territory of their opponent.

7) Some sources also indicate that he was known by the name “Sakagami Shūzen” (坂上主膳).

13) This is done in a ceremony when a boy reaches his coming of age, which is called Genpuku (元服).

14) 林崎夢想流. Also known as “Shin Musō Hayashizaki ryū” (神夢想林崎流). Take note that Hayashizaki Shigenobu himself did not name his sword system this, but later generations did in remembrance of his contribution.

15) There is an article about Tsukahara Bokuden, which can be read here.

16) In Japanese sources, this is mentioned in a vague manner, as it is stated alongside with Shigenobu’s travel to Kashima to study under Tsukahara Bokuden. Under who and exactly where he studied Katori Shintō ryū is not made clear. While historically Bokuden learned Katori Shintō ryū at a young age, as an adult he started his own martial system.

17) The full title of what Shigenobu is said to have been taught is “Kashima Shintō ryū Saikō Hiden Tenka Dai Ichi no Ken” (鹿島新当流最高秘伝天下第一之剣).

19) 陰陽開合. While the exact details are not described, this is related to rhythmic exercises, which is found in specific martial systems such as Taikyokuken (太極拳).